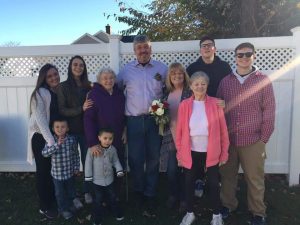 Five years ago, when Katie Stewart and her then one-year-old son, Joey, moved in with her mother, Robin Whinnem, and her stepfather Stan Kurandy and two step-brothers, Nick and Alex it was an adjustment. “It was culture shock – I didn’t grow up with a boy,” says Katie, who has one sister. She and her son both live with osteogenesis imperfecta (sometimes called “brittle bone disease”), so when her relationship ended and she needed a place to live and help caring for Joey, fears that he could break a bone in a day care situation made home care a better option. So, Katie cared for Joey during the day, and worked nights while her mother cared for Joey.

In addition to this three-generation home, Stan’s mother, Helena, 94, lives right next door, so they are, in reality, a four-generation household. Robin says her mother-in-law has never driven and only speaks Polish, so the family helps with translation when needed (Stan is the only family member who speaks fluent Polish), running errands, doctor appointments, and house and yard work.

Logistics in the home have been a challenge. Robin, 55, works from home, so she needs a home office, and Stan, 54, is a contractor, whose work has been curtailed due to the pandemic, so lately he’s been home more than usual. Nick, 21, works part-time and is training to become an HVAC technician. Alex, 19, is fresh out of high school. Katie, 27, and Joey, 6, share a bedroom. There is no dishwasher; “I’m the dishwasher!” exclaims Robin. So, the four-bedroom house isn’t very well suited to this multigenerational family of six people. But it is in the right location. “Being next door to my mother-in-law is working for now,” says Robin, who also cares for her mom who lives just two miles away and has been battling cancer.

The pandemic has caused an already small home to feel smaller. “We’re all here more of the time,” notes Robin. “Before, everybody had their own things – either they were going to school or they were going to a job or something.” She says they are all going a little stir-crazy. But the family gathers for dinner most nights and almost every Sunday night. And they have learned to live with it.

Joey has had seven or eight bone breaks in his short life, and is often in physical therapy. He adores Stan and stays glued to his side. “My son actually loves it. He can’t imagine living anywhere else,” says Katie. “This was the best solution for me and my son so I embraced it. Sometimes it is hard. There are so many people, and everyone has different opinions.” But after five years Katie says they are happy with it. “It does amaze me that we just became such a blended family that it feels like we didn’t really ever know a time before this family that we have now.”

Thinking of her daughter, Robin says, “It’s hard for the 20-something-year-old to think they’re a failure because they’re moving back in with mom. But that’s not the case. It just makes the most sense, both financially and care-wise for your specific family situation.” She says their multigenerational household is a good solution, “Combining households sometimes does make it a lot easier.”

Read the full report and other family stories at Family Matters: Multigenerational Living Is on the Rise and Here to Stay.