A record number of Americans live in multigenerational households today.

Multigenerational families offer a number of advantages to its members. These households also face many challenges. Generations United urges policymakers and the private sector to offer supportive policies and services to support them.

What is a Multigenerational Household?

The U.S. Census Bureau defines multigenerational families as those consisting of more than two generations living under the same roof. Many researchers also include households with a grandparent and at least one other generation. 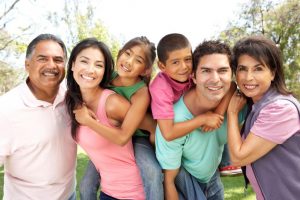 Multigenerational households have rapidly increased in the last few years:

Major Factors Leading to the Increase in Multigenerational Households

Five major factors appear to contribute to the increase in multigenerational households:

Slower Starts: People are marrying later. More unmarried 20-somethings continue to live with their parents, by choice or economic necessity.

Immigration: Latin Americans and Asians have immigrated to the U.S. in large numbers. Immigrants are more likely to live in multigenerational families.

Availability of Kin: There are more Baby Boomers currently financially secure and able to offer their parents a place to live in their old age while providing a home to their own children.

Health and Disability Issues: Increasing numbers of Americans of all ages suffer from chronic conditions and disabilities. They may move in with family members to gain access to caregivers for themselves and/or their children.

Economic Conditions: During the Great Recession many Americans struggle with job loss or other forms of reduced income. Sharing household expenses across generations make them more manageable.

Multigenerational Households come in all shapes and sizes. A few common types include:

Three-generation: The most common multigenerational household arrangement consists of three generations – typically one or more working-age adults, one or more of their children (who may also be adults), and either aging parent(s) or grandchildren.

Grandfamilies: There are also growing numbers of grandfamilies – that is, households headed by an older individual or couple who live with grandchildren under age 18.

Two adult generations: Most two-generation households consist of parent(s) and child(ren) under the ages of 18 to 22. However, households with “boomerangs” are on the rise – grown children who because of unemployment, underemployment or other reasons return to their childhood household.

Four-generation: Once a rarity except in some lower-income ethnic communities, the four- or even five-generation household – parents, grandparents, great-grandparents, adult children, their children – is more commonplace and socioeconomically significant.