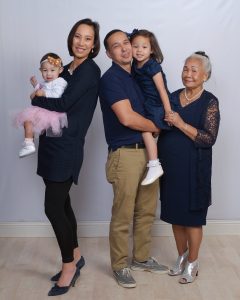 When Jessica Winn, 33 and her husband, 42, became pregnant with their first child, Cora, they knew there would be help. They appreciated that her husband’s mother, Maria, would live with them and help care for their children as she had done for her other grandchildren. “As each of her children had children, they would move in with her or she would move in with them and support each other, especially through the early stages,” shares Jessica. Indeed, Maria moved in just before the baby was born and she has stayed through the birth of their second daughter, Lori as well.

Jessica says she was a very welcome addition to the household. “I guess with some people, they may not expect it. Sharing their home with their mother-in-law might not be as welcome,” she notes. “But for us, over the years we would kind of joke about, ‘oh, it’s your turn next!’ So, it was expected.” It was expected and embraced by the Winn’s, in part, because Jessica’s husband was born and raised in the Philippines, where it’s common for grandparents and extended family to live together and help raise the next generation.

And she has been a big help. Maria, known as “Lola” by her adoring grandchildren, Cora, now 4 1/2 and Lori, now 2, has helped care for them while Jessica and her husband were working. Before Lori was born, Jessica sent Cora, who was a 2-year-old at the time, to day care. She didn’t want it to be too much for her mother-in-law, but Maria insisted she would take care of the younger infant, not wanting strangers to take care of the baby. “And that is part of that kind of tradition and family role,” adds Jessica.

Now, during the COVID-19 pandemic, her presence is all the more helpful, as Jessica works from home and her husband, who repairs jet engines, works out of the home. Jessica says she is especially grateful when she hears stories from colleagues. “They are juggling work and zoom calls and virtual school for their kids – and their kids are right there next to them – it would make me pull my hair out.”

The family has been very protective of Maria, 78, during the pandemic. “Even when going to the playground with the girls because they need to get outside, I see a lot of kids out there, and even parents, that don’t wear their mask,” she says. “So, if I see a lot of kids at the playground, I have to say no to the playground.” Her husband’s work is also a risk, but she says he and his workplace are very good about safety precautions. “That’s probably our biggest exposure point,” she notes.

Jessica believes that multigenerational living is a very practical solution. “I do think that more and more Americans in the general population will start to see that there is a different way of living and aging and having a family,” she notes. “If nothing else, this pandemic has really shown that even with two parents in the house, raising kids by yourself is almost impossible.”

Read the full report and other family stories at Family Matters: Multigenerational Living Is on the Rise and Here to Stay.