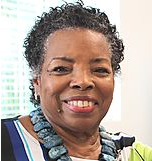 Dr. Rogers’ clients are wide and varied and include such notables as the Tuskegee Airmen, Philadelphia Department of Public Health, Philadelphia Department of Human Services, School District of Philadelphia, United Way, Opportunities Industrialization Centers (OIC) of America and Philadelphia, National Urban League, North Carolina Division of Aging, US Center for Mental Health Services, and the US Center for Substance Abuse Prevention. She is particularly proud of the national school-based substance abuse prevention curriculum she developed in and adopted by the government of Malaysia on behalf of the US State Department. Dr. Rogers also coordinated a national mentoring project, Linking Lifetimes, in 11 American cities for high-risk youth and a kinship support program, Grandma’s Kids, under the Temple University Center for Intergenerational Learning which has served as a national model.

Dr. Rogers was the first Executive Director of the Philadelphia Martin Luther King Center for Nonviolence where she worked closely with Coretta Scott King and other civil rights icons. She initiated the first latter-day freedom rides taking youth from Philadelphia to southern civil rights historic cities/locations arranged for them to meet with such notables as Rosa Parks, Coretta Scott King, Andrew Young and many unsung heroes of the movement. Dr. Rogers’ community work has been recognized by many national and international Who’s Who, and she has many local honors. She earned a bachelor’s degree in psychology from Temple University, master’s degree in special education from Antioch University, and a PhD in educational psychology from Temple University.